It is believed by many that the games were the most sacred practice of the Maya and the winners were sacrificed with honor. Others find this speculation hard to believe with the idea of all the best players being killed off leaving no competition for future games. For this reason, they believe the losers were sacrificed. If it was an honor to win the game only to be sacrificed they must have believed it was for a valid reason and this would encourage future team members to compete harder. What if the ballgames were not for entertainment purpose but were instead used to determine who will enter the afterlife?

Was this part of their beliefs of entering the next life with royalty and honor? The depiction on walls of the players wearing their headdresses and royal jewelry should indicate they were of high rank on both sides. Even if the losers were sacrificed, why would they risk their lives to please the gods or for the sake of entertainment? It seems they would want to hold their positions by sacrificing someone of less importance as the ancient Roman gladiators did.

The stone circle mounted to this wall was used for an ancient Maya ballgame called poc-ta-poc which must have been an important part of their everyday lives. Photo source.

Remember to Remember: The Mayan Mysteries

Researchers speculate that the ballgame is related to a story of twin brothers known as the hero twins. They were resurrected after their sacrifice to the gods of the underworld. What if the resurrection is actually reincarnation in a more advanced society with its players being considered gods because of their rank and greater level of skills? As in most parts of the ancient world, the Maya built their temples and monuments overtop previous sites.

It was believed they rebuilt every fifty-two years, which coincided with the long count calendar; but others speculate these projects were initiated by new rulers for political reasons. This follows the same idea Egyptologists believe in relation to new Pharaohs taking control of Egypt. It is thought at times they would destroy any evidence of previous rulers out of spite or an attempt to cover-up previous records, as in the case of Hatshepsut. Is this idea inaccurate in the Maya kingdom?

Many pyramids and temples show signs of having a few ancient sites below what is seen today. Why would they purposely build on the same exact location unless it was for a significant purpose? It seems beneficial to put their resources and energy into additions on the previous structures rather than build on top of them. Much time and effort was put into the accuracy and alignment of these temples and pyramids to celestial bodies and events.

Or do they exists in a key location for the alignment of certain star systems during certain times of the Maya calendar year? Maybe the rebuilding of these monuments was for the purpose of calibration to properly adjust their alignment to certain star systems? Part 2 — The decline of an advanced civilization. Mark Van Stone. David A. Carr is an author and independent researcher. He has researched in the fields of lost ancient world science and theory in modern science for the past two decades. He has had several articles published on subjects such as Read More.

Like most ancient civilizations, the Mayan's had extensive knowledge in collecting natural energy using frequencies and magnetism, the use of sacrifice is always linked to this some how as in they knew something we didn't about celestial line ups and our natural bodies resonance that benefits us in someway.

Sacrifice is such a strange thing. OT sacrifices are usually animals rather than people, but even so, wtf? The premise that the architect and creator of the universe requires a life to be ritually ended in return for effecting a change is weird. Even in the instances where "God" approaches the human and says he wants something done, the human has to make a sacrifice before the plan can happen.

Why should that be? There do seem to be rules underlying the whole sacrifice thing, but I don't understand them. And the system appears to have gone dormant or stopped working at some point in the past 2 millenia, possibly resulting in the abrupt and devastating collapses of civilizations and empires around the globe. Something changed. One of the most interesting accounts of sacrifice in the biblical OT takes place after the flood, when the Ark has grounded on the mountain. Noah and his family "build an altar of unhewn stone" and make a sacrifice upon it, then set the resultant mess on fire.

It says the smoke of the burning sacrifice was "heady" or somehow alluring to God and he follows it to Noah's position. Again, wtf?? God likes the smell of burning flesh? The bit about unhewn stone is interesting as well. Why is that important? I recall that Solomon was instructed not to hew the stone which would be used to build the first temple in Jerusalem as well The Quran says that this is why Solomon made the Djinn build the temple I also recall that in Fairy lore, "cold iron" was for some reason repellent to the powerful fey folk.

They hated it, couldn't stand to even be in close proximity to it. And even today we can see that many cairns, menhirs, and stone circles are made of unhewn stones. It's a good question but there is actually extensive evidence that sacrifice occurred after the game. It is depicted in detailed carvings around some of the ball courts that have been found. What if the ball games were just for fun and had absolutely nothing to do with sacrifice?

That seems more likely, who would take up a sport where the loser or winner gets sacrificed.

Ancient Origins has been quoted by:. By bringing together top experts and authors, this archaeology website explores lost civilizations, examines sacred writings, tours ancient places, investigates ancient discoveries and questions mysterious happenings. Our open community is dedicated to digging into the origins of our species on planet earth, and question wherever the discoveries might take us. We seek to retell the story of our beginnings. There's no way yet to determine just how many eruptions occurred, their frequency, or which volcanoes the ash came from, he said.

Ashfall has been reported at Tikal as recently as the s, according to University of Colorado anthropologist Payson Sheets. Pictures: See what the Maya Empire looked like. The new findings are "spectacularly important," Sheets said, because they could help explain a central mystery about lowland Maya cities.

And yet archeological evidence suggests cities such as Tikal were able to support between to people per square mile 2. But if the Maya-lowland soils were dusted with volcanic ash every few years or even decades, they would have been periodically enriched. Volcanic ash can help make soil more fertile by increasing its permeability and porosity, thus improving its ability to retain water. Volcanic ash is also a source of plant-friendly minerals such as iron and magnesium. Sheets estimates that even a light dusting of volcanic ashfall—say, a few millimeters—could have enriched the soil for "at least a decade or two.

A more substantial ash cover—perhaps a couple centimeters nearly an inch —might have boosted soil productivity for much longer. For one thing, the tiny ash particles would have suffocated many plant-pollinating insects, Sheets said. And ash can encourage acid rain, which can harm crops. Take a Maya quiz. In general, Sheets said, volcanism was an integral part of ancient Maya life.

Some of the temples in the highland Maya cities, for example, mimic sacred volcanoes.


But whether temples at Tikal—where no volcanoes were visible—and other lowland cities were similarly inspired is unclear. Volcanic eruptions also fit into the Maya worldview that life is full of phenomena that can be either hazards or opportunities, and that human behavior can tip the balance, Sheets said. 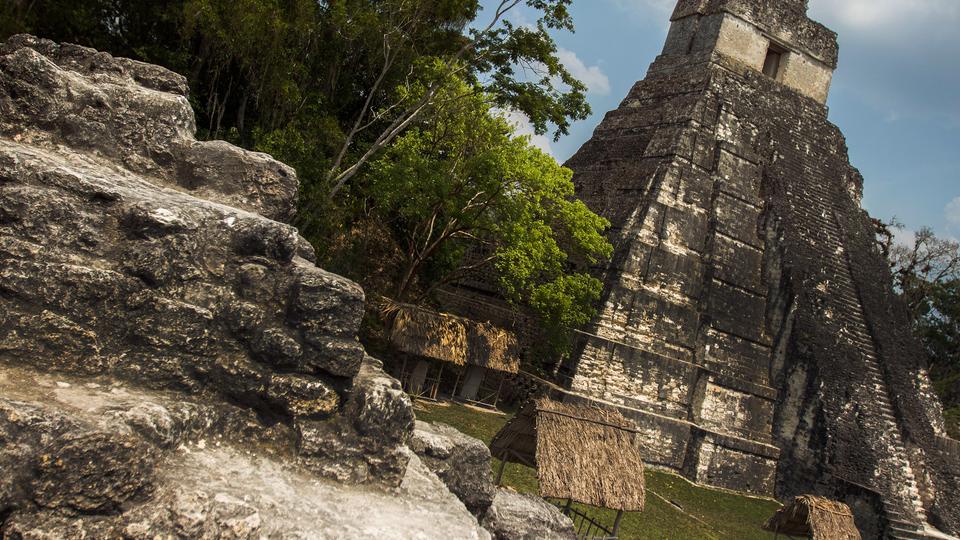 For the Maya, a smoking volcano wasn't always a harbinger of doom. Humans could turn its ash into a benefit, such as fertilizer or additives to strengthen pottery clay.

Study leader Tankersley emphasizes that the unpredictable mountains, too, were at the crux of Maya culture. Photograph by Simon Norfolk, National Geographic. Read Caption.